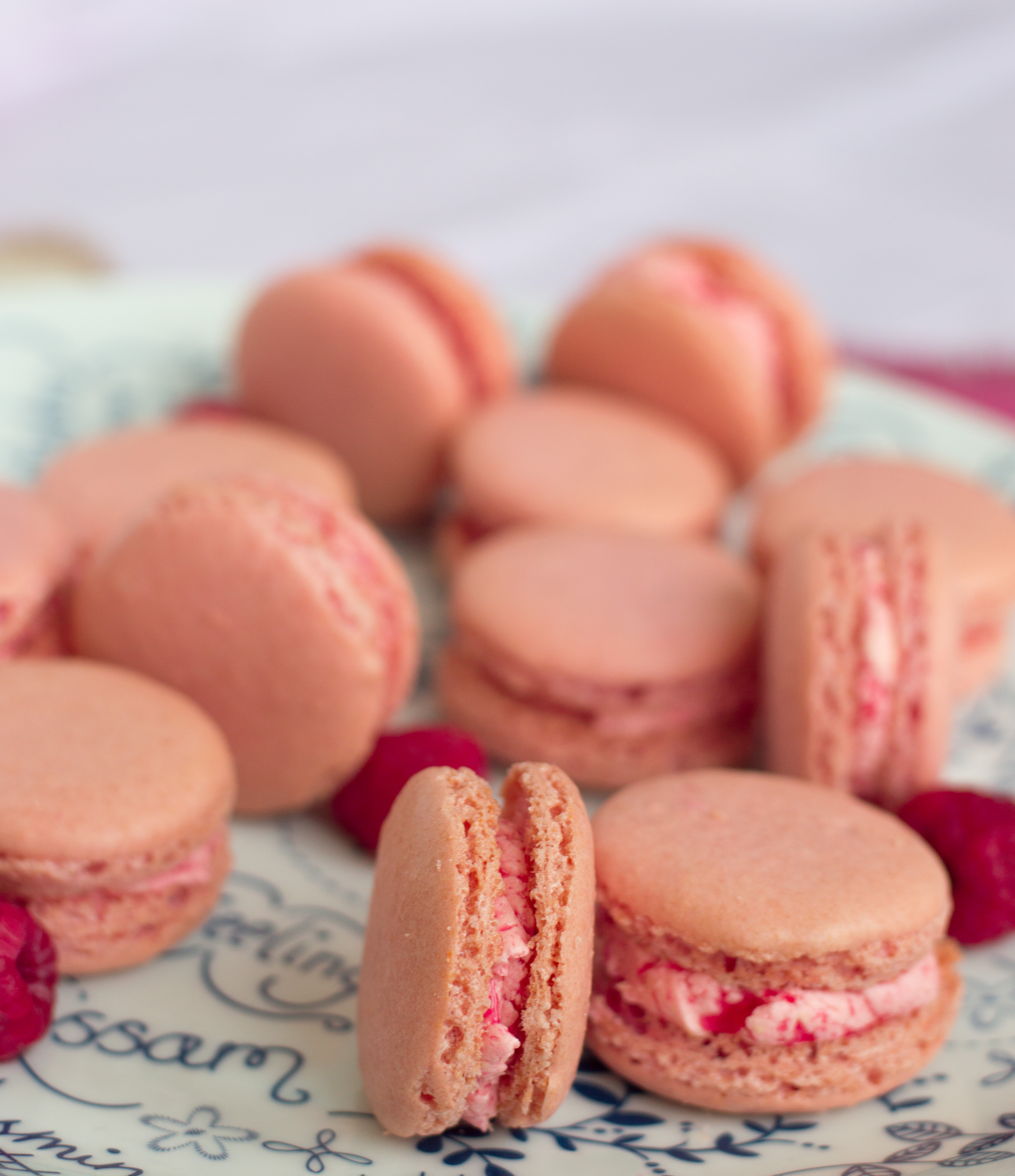 In my opinion the Christmas period covers the three days of Christmas Eve, Christmas Day and Boxing Day. After all, there’s eating, drinking and indulging throughout these days and this year was certainly no exception.

I’ve been practicing this Raspberry Macaroons recipe throughout the run-up to Christmas, despite still needing to complete the Christmas shopping! (why I always leave it to the last minute is beyond me).

Anyway the practice was worth it and after a number of failed batches I finally came up with the right bake and these were presented as a little something to the hosts and hostesses of Christmas Eve and Christmas Day, which went down a treat!

I’ve broken down this recipe the same way as I did for the Chocolate Nutella Macaroons and kept it as straight-forward as possible. I won’t lie and say they’re the easiest cookies to make, but they are so worth it and once you get the hang of it they’ll become a kitchen favourite.

Combine the ground almonds and icing sugar in a large bowl, mix well with a spoon then run through a sieve into a separate large bowl. This will help make the macaron light and smooth.

In a separate bowl, whisk the egg whites to form stiff-peaks, then add the salt followed by the sugar and whisk again for a further minute. At this point separate the meringue mixture into a different mixing bowl if adding a different flavour/food colouring combination.

If you’re not separating the meringue, add the food colouring and raspberry extract, then incorporate with a metal spoon (it’s better to add more than the desired amount of food colouring as the macaroons will lose some colour during baking).

Now add half the almond and icing sugar mixture to the meringue and mix well with a wooden spoon, then add the remaining half (be careful not to undermix as it will crack once baked). The batter will be mixed enough when you can no longer see any of the almonds and it’s at a ‘dropping-consistency’.

Transfer the batter to a piping bag that’s fitted with a 1cm/large nozzle and line two large oven trays with baking sheets or use a silicon macaroon mat.

Pipe out from the middle about 1 inch mounds onto the sheet (about the size of a 2 pound coin).

Pick up the tray and drop it back onto the surface to release all of the air, flip the tray around and repeat (you should see little air bubbles pop). Do this 3-4 times to ensure all the air has disappeared.

Leave the trays out for 30 minutes (if you bake them right away they will spread out instead of rising up).

With 10 minutes remaining, pre-heat the oven to 140C (fan-assisted) then when the 30 minutes is up, bake for 15 minutes. Be careful not to underbake or they will stick to your tray.

Meanwhile make the raspberry filling. To a large bowl add the unsalted butter, along with the icing sugar and whisk to a crumb-like consistency.

Next take the raspberries and press them firmly through a sieve to extract the juice. Once you have about 3 tablespoons of the raspberry juice add it to the butter mixture and whisk until well-combined.

Transfer the buttercream to a smaller piping bag that’s fitted with a smaller nozzle (1/2 inch).

To remove the macaroon shells, carefully twist them first before lifting them away from the baking sheet.

Fill both shells with about 1/2 inch of the filling (fill from the centre and leave a small gap to allow the buttercream to spread out without overflowing). Attach both halves together and leave to set on a wire rack for at least 20 minutes.