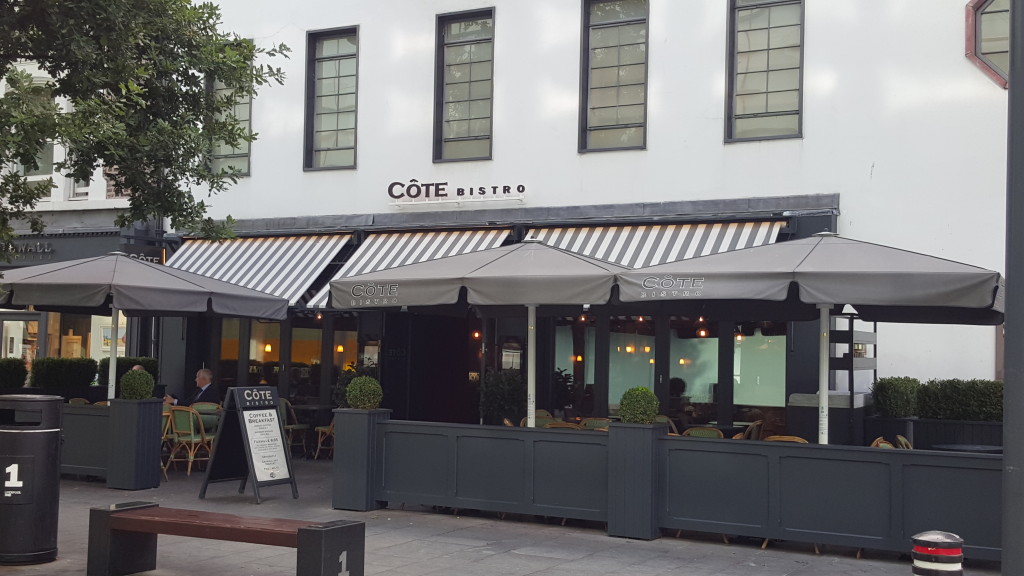 After a terrific day spent in New Brighton, on the Wirral, me and my girlfriend thought we’d come back to Liverpool and try one of the many restaurants on our ever-growing list of places to sample. Living in the centre of Liverpool certainly makes it easy to go exploring new menus and cuisines, so we thought we’d try Côte Bistro, which was located right opposite John Lewis.

Considering we walk past the restaurant 2-3 times a week, I was quite surprised that we’ve not already stopped by since it opened in December last year.

As soon as we arrived we were immediately greeted by one of the waiting staff who gave us the choice to dine inside the restaurant or go ‘al fresco’ and sit outside. As there were outdoor heaters (and it wasn’t actually raining!) we thought why not seize the opportunity! It certainly made a nice change as we usually have to wait until we go abroad to enjoy that pleasure.

The waiting staff and in particular, our main waitress, Anna, couldn’t have looked after us any better. She was friendly, attentive and very knowledgeable when we enquired about a particular cheese from the ‘starter’ part of the menu. She had clearly tried the dishes and was very enthusiastic about them which we both found quite refreshing from the service.

It was a great start to the dining experience because you think that if the service staff are ‘on point’, the food and the other details will be also. 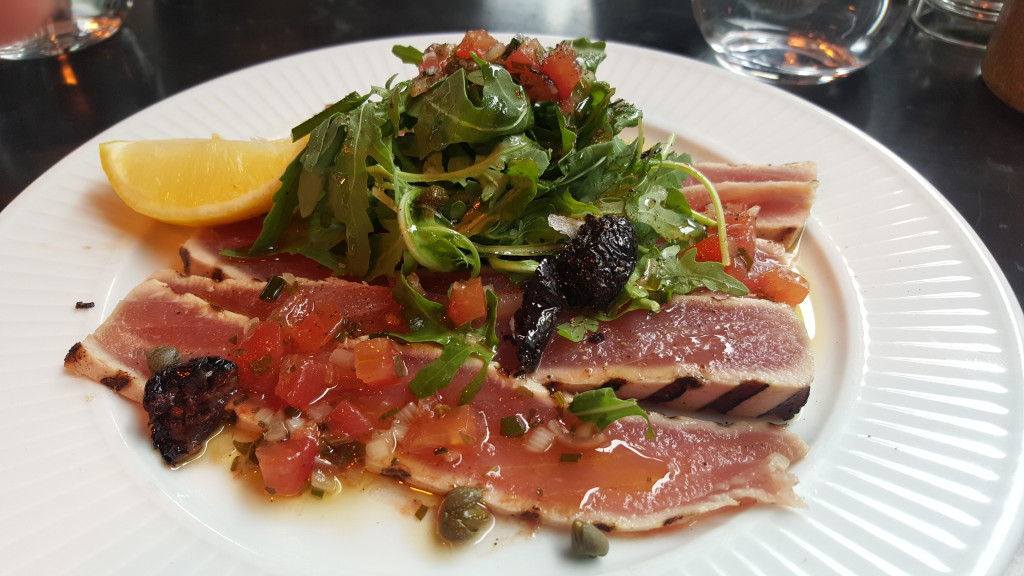 We ordered the Tuna Carpaccio and Calamari to start with. We were a little disappointed with certain stock levels of what was available and what wasn’t. For instance, a fizzy orange soft drink was out of stock, along with garlic bread and Creme Brûlée dessert. I understand that the dishes are popular but you would have thought that after 8 months they would get their supply and demand right.

Despite this rare disappointment, the rest of the meal was faultless. I’ve been saying for some time now that when we go out together, we want to be impressed and want to love the dishes and restaurants, and spread the word to others. Well, this is the place. As good as the dishes look in these photographs, they still don’t do justice to just how good this food tasted.

The Tuna Carpaccio was the perfect starter. It was lightly seared, well dressed with the perfectly-complimented tomato vierge. There was also enough of it to justify the price. 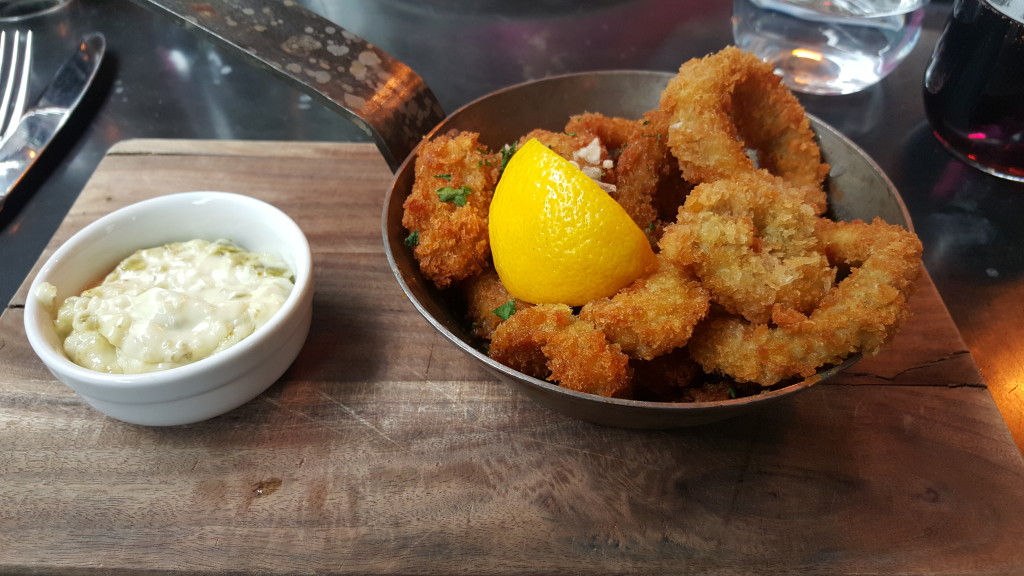 Usually the problem with Calamari is the inconsistency of how it is cooked, from one restaurant to another. Sometimes it turns out fine, then we go somewhere else and it’s chewy. This was perfect, melt-in-your-mouth calamari, with a light breadcrumbed batter. Perfect.

When it arrived it was cooked perfectly on both plates, which looked identical. It demonstrated that the kitchen has an eye for detail and consistency, which really impressed us both.

The duck tasted great and was served with dauphinoise potatoes (not the healthiest but it was the weekend!) along with a delicious sauce. 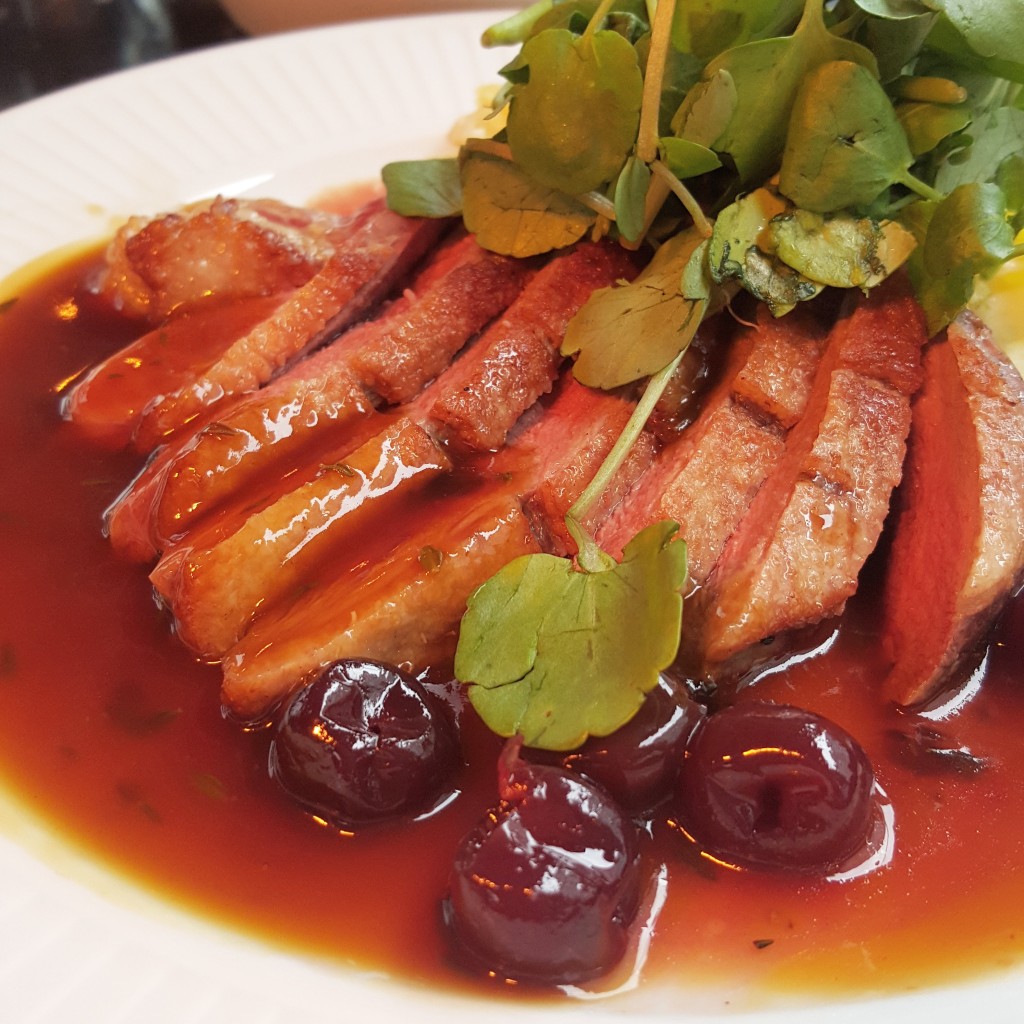 The meal wasn’t too expensive which was a nice bonus. It shows they want to cater for the masses rather than a ‘select few’ which was certainly appreciated.

My only sticking point, and it is a real annoyance, is when restaurants automatically add a service charge onto the bill. This was a table of two people, not a table of eight which would have been a different story. It should be up to the customer to reward the high quality of service that was received (and we did reward it), not automatically added on.

So we asked for it to be removed and said we’d leave our own tip. The waitress seemed slightly confused by this request so I explained that even though you might be doing a good job, it doesn’t necessarily encourage others to do the same if they know they will receive 12.5% service charge no matter what kind of service they deliver.

That would be the one thing I would like to change, however aside from that, and the slight disappointment in the stock levels, it was a fantastic experience of high quality food, matched with friendly and very attentive service. We’ll certainly be coming again!